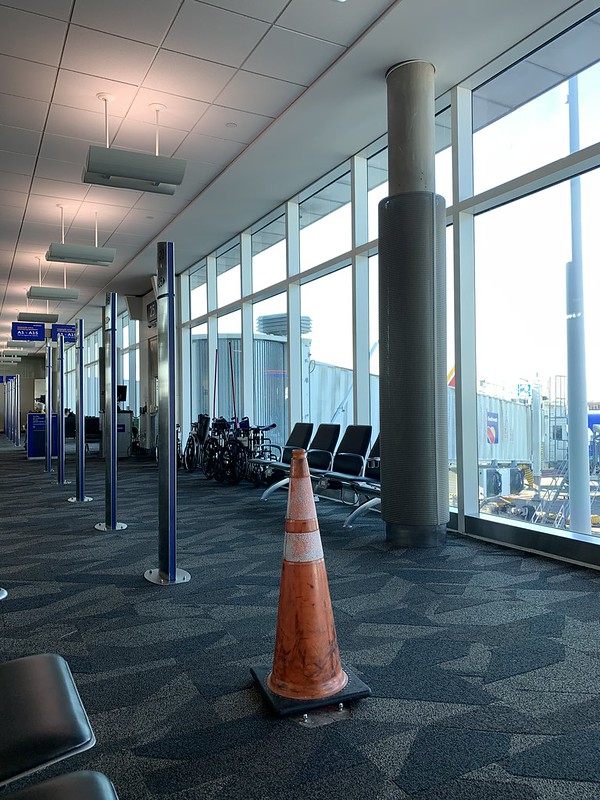 I like to go through my Flickr photos from time to time in order to tag, title, and make them public. They automatically upload from my phone. But, they stay private until I have had time to review. This also gives me time to delete images that have no place in my collection.

In this photo, there is a well-worn traffic cone that is placed over some protruding floor bolts to prevent passengers from tripping on them. This was at a Southwest Airlines terminal in the William P. Hobby Airport in Houston.

Southwest has worked out a system where you get a number on your ticket that sorts passengers for boarding. The posts in line with the traffic cone have numbers that tell passengers where to stand for pre-boarding.

I have to wonder what the story is that led to removal of that last pole. Did somebody lean on it? Was there an irritated passenger who knocked it over? Was it defective?

I'm reasonably certain that the intention is to replace the pole. Otherwise, they would have cut the floor bolts and ground them down flat.

That traffic cone seems to have endured some tough times. Do you think it appreciates having a chance to work indoors for a few days? Maybe it's hoping to get hired for the position permanently?

I don't recall what I was thinking when I took this photo. But, the scene was unusual enough to catch my attention.