I am trying something different for today's blog post. Blog posts are typically a writing project, which is different from a journal entry. Journal entries are about anything and everything that happened throughout the day. Blog posts are about one topic, and are less candid with life details. Today, we blend the two. There will be more than one topic. However, do not expect the full candor of a personal journal entry. If this works out, creatively, then we will have found a new direction for this blog. 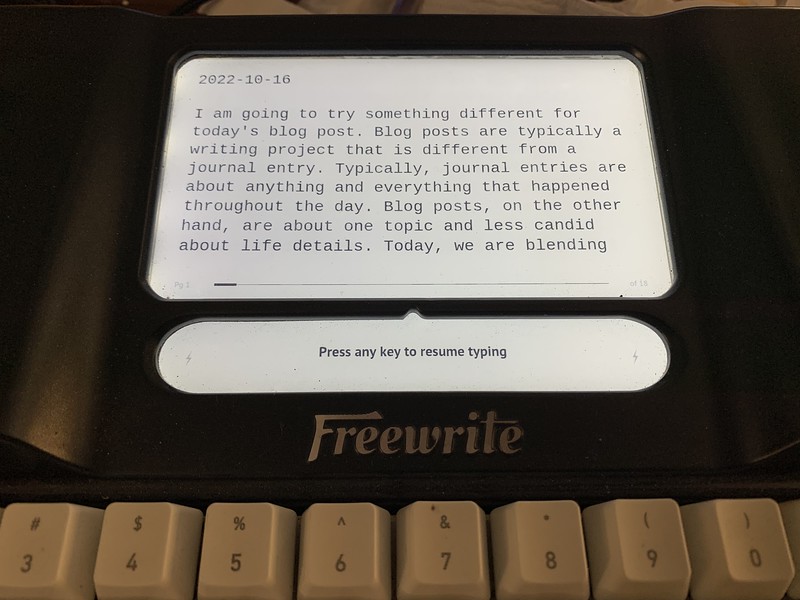 The official inflation rate is 8.2% annually. The Government tries to keep the reported inflation rate as low as possible to avoid having to pay out more to retirees on Social Security benefits. Food and fuel are left out of the equation. These are closer to 10% inflation.

Never mind the overall macroeconomy. My own personal economy is being severely impacted. At the risk of reprimand from my employer, my salary increases were non-existent the first three years on the job. After that, the increases have been less than the official inflation rate, even when inflation was roughly 3%, officially. While I am content with my job, I can't help worrying as I am slowly being squeezed. The higher-ups get a percentage salary increase. My raises are a fixed amount, not a percentage. For those earning less than me, they are at parity with inflation. Of course, as your pay goes up, that same fixed amount is a smaller percentage raise. I may be earning what I was, or less, when I first got hired in inflation adjusted terms. My micro economy is feeling the pressure.

That brings me to taxes. I'm one of those who filed for an extension thanks to the complications of crypto. I'm going to have to file today to avoid the rush tomorrow. Last year, I made out like a bandit on crypto. Now, I'm going to have to pay the piper. That's what worries me. It was a significant gain. Since then, crypto has dumped, which means that I will need to pay the tax out of income rather than what remains of my crypto savings.

Without going into specifics, our organization has been in a bit of limbo for the past couple of months. As a team, we have limped along trying to keep things going. Finally, we are on the verge of changes that have the potential to improve our situation. We are optimistic that things will turn around. We expect some changes to how we operate. But, as a team, we welcome the changes. Of course, I say that now. The future will tell.

Until now, I have not mentioned that I have an umbilical hernia. It happened maybe a year or two ago. It wasn't much of an issue during COVID lockdowns as the physical demands of my job were diminished. As things returned to normal, the physical demands returned. Something must be done about it. Things cannot remain as they are.

Surgical remedies show a preference for a mesh prosthesis. Mechanically, a mesh is a stupid idea. Fascia stretches and contracts. Meshes seem stiff. Furthermore, they seem to be spot sutured in place. They do not inspire confidence.

Fortunately, there are surgeons who will repair hernias without the mesh. If treated before the hernia gets too large, the mesh is not necessary. At this early stage, there is now some urgency to undergo the procedure before it is necessary to resort to a mesh.

At the same time, work cannot spare me for the recovery period. The procedure will have to wait on hold until work stabilizes. Perhaps in a month.

Twitter has been of less utility in recent years. Between the spam and censorship, the value of that stream has declined. However, now that Elon Musk is more certainly going to buy the company, these matters may very well be resolved. Depending on what he implements, Twitter may become useful again.

Of particular interest is identity verification. Requiring a real person to be connected to an account would fight spam. If Twitter plans to include payment processing, then KYC will be required for compliance. It is feasible to have both verification and anonymity. Twitter would need to know your identity. But, the public does not need to know. Or, alternatively, accounts not engaging in payments would not be required to do KYC. Perhaps they would also have other limitations to encourage verification.

The account is named TravelWriteMoney to reflect my three main interests. These interests are travel, writing, and money. The money writing has had limited success. The travel writing often has great success. The creative writing does not get exercised. The plan is a sort of novella.

The point is that the amount of effort and the returns on writing about money matters are not matched. Writing about travel has been more rewarding. My focus should be on travel writing, obviously.

Over the years, we have visited many places. The photos we took are enough to reconstruct the experiences in writing. There should be plenty of photos to make it possible to write several posts until we are able to travel again.

With that, we shall end this blog post experiment. If you are reading this, then it has largely survived editing.

The writing process begins with a handwritten outline of the post. That outline is turned into writing on a Freewrite keyboard for distraction-free writing. Then, the writing is picked up on Evernote for reading and editing. The edited version is then pasted to the blog for posting. Simple, right?

They say that the best writers are rewriters.