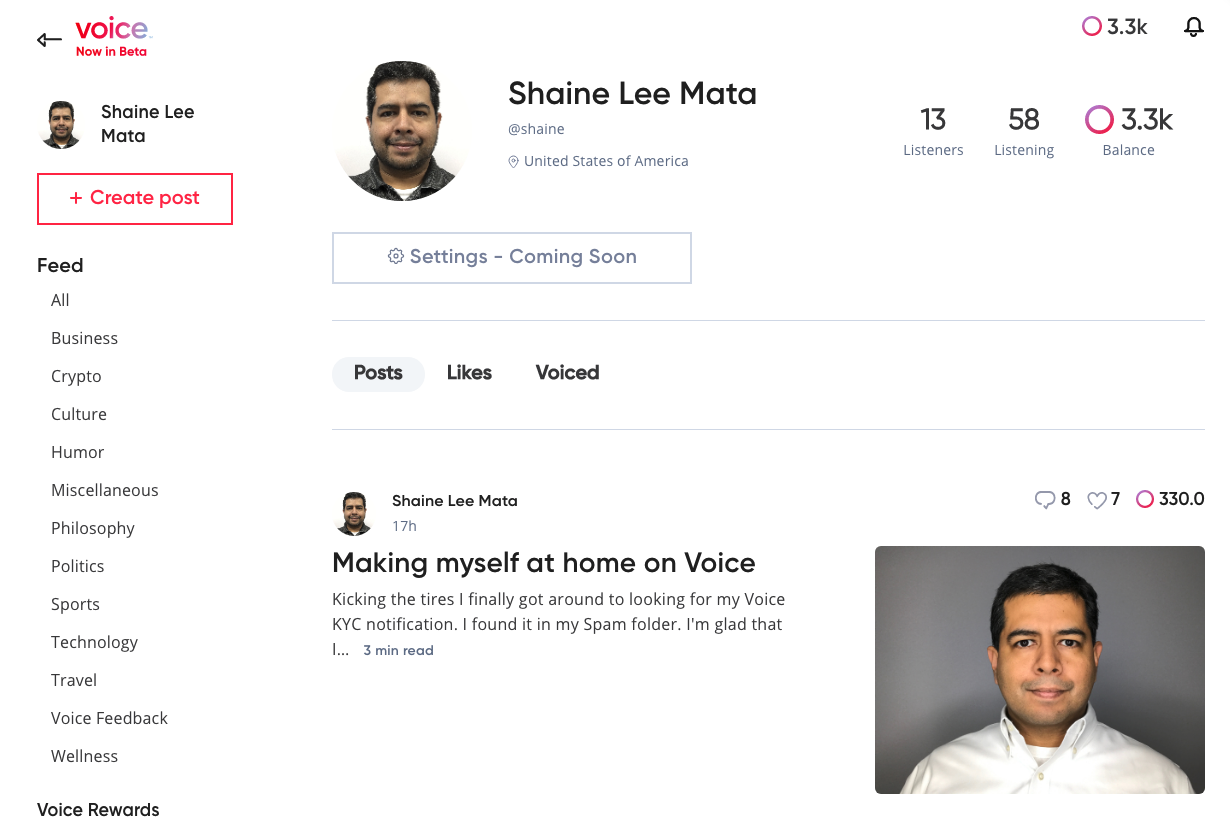 I got into Voice Beta last night. It is still very basic in its features. More features are in the works. Some were taken out of the Beta rollout for more development.

So far, the experience is interesting. It's a bit wild west as there is no way to see the feed from people you follow. Posts naturally rise up as they get more attention, which is generated via the Voice Token. Therefore, the more people pay to be the top Voice on a post, which gets locked after 24 hours, the higher the cost goes. The goal is to have a good post locked with your name as the top promoter to ensure you get traffic. This would be the Voice equivalent of Boost, except that it's auction style rather than fixed cost. My understanding is that later there will be an option to insert your ads when you win.

The blockchain awards you 100 tokens at a regular interval. In order for you to claim rewards, you have to log in and claim any that are pending. There is already some gaming of the system. Keep in mind that you lose tokens as you Voice other posts. You get some back when you get outbid. The system also burns a third of the tokens used to outbid you. The content creator gets a third as well. Ultimately, there won't be an infinite amount of tokens because they will alway be in play. And, if you are not active, you don't get any more.

KYC wasn't terribly invasive. You simply need to take a picture of yourself and submit pics of your license or passport. Once verified, you get a link that activates your profile. There is no way to change any settings on your profile yet. These are in the works.

I think they have done a fair job in that Voice is not as difficult as Steem was to get started. It's just as easy as Minds. It has a very clean look. I don't know if that's because it is missing features or an intentional aesthetic.

So far, there is some chatter about what it means to voice your opinion using your own identity. This has not been a problem for me because I have tended to post things out in the open. However, I have to think that it would not work so well for people like Tommy Robinson whose real name is different than his brand name. Or what about Sargon of Akkad? Not everybody knows Benjamin as well as Sargon.

There is some expectation among those who have joined Voice that eliminating anonymity will make discussions more civil. So far, it seems that way. I am curious if KYC will actually prevent people from being jerks. One can't make that assumption yet because the only people getting in to Voice are crypto nerds who have been following EOS. Once the platform is open to the public, I expect the level of stupid to increase dramatically.

I'll keep plugging away at it for now. At the very least it's another way to connect with people who I wouldn't normally have met.