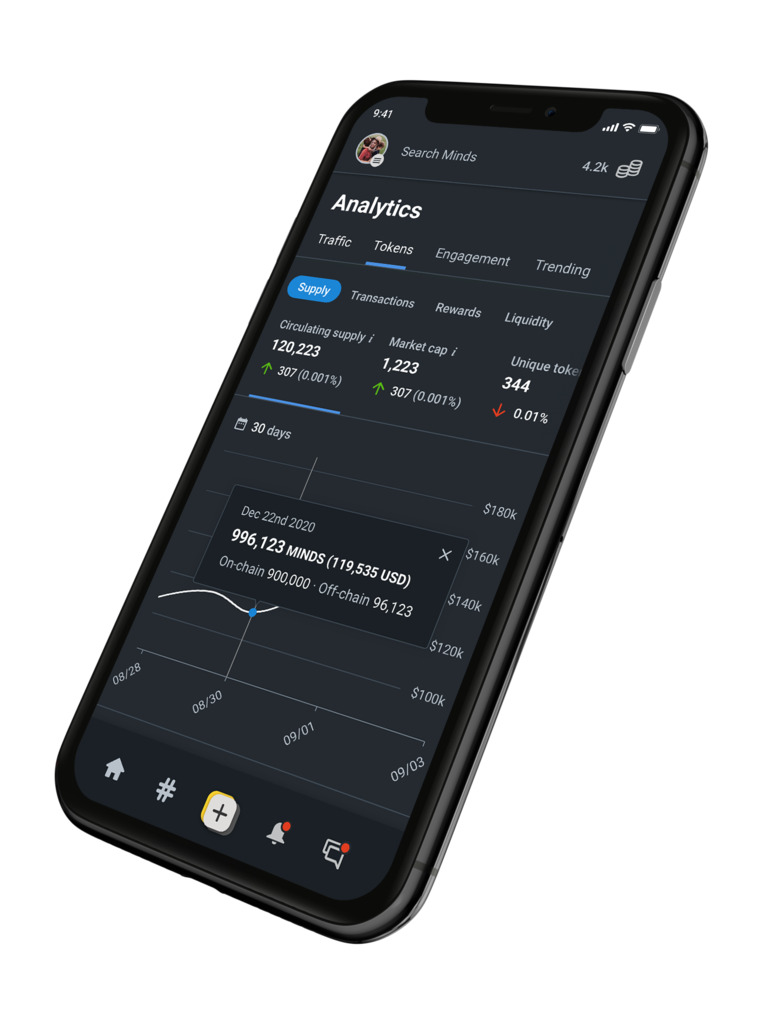 Minds.com is changing the tokenomics of their community. The changes are increasingly beneficial to those seeking to turn their online activity into a business. Although, some of this is hampered by the high gas fees on Ethereum. Fortunately, the upcoming EIP 1559 will soon solve some of those shortcomings. Once that is in place, Minds token is set to take on more serious use. Let's go over some of the improvements I have seen over at Minds.

The basic way that Minds works is that you post content which gets rewarded with tokens when others upvote, comment, or remind it. This is limited to one activity per day to eliminate abuse from spammers or bots. Therefore, multiple upvotes from the same person only count the one time until the next day.

Tokens that you earn can be redeemed for boosting your content. This is an advertising service in which your Boost will be displayed on the home screen for others to see. You exchange 1 Minds token for 1000 impressions. You can Boost individual posts or your channel as a whole.

Tokens can also be used to tip other users.

Another use is to make an offer to another user to remind one your posts on their channel.

Minds also has a feature allowing channels to set up subscription levels for content, which can be paid with cash or tokens.

Minds+ is a monthly or annual subscription that gives users access to premium content and removes adds, which are called Boosts. Revenue from Minds+ subscriptions is pooled together and then distributed among members based on their activity on the network. Generally, Minds users are rewarded with tokens, even on the free membership. However, Minds+ takes things a little further by giving you the option to earn in Minds tokens or earning in cash. This is decided by the type of subscription you choose. Paying with tokens earns tokens. Paying with cash earns cash and the tokens you would have earned with the free membership. Minds+ content can only be seen by subscribers.

Therefore, based on how well you are on stimulating interaction from other Minds+ members and the free tier members, you could earn hardly anything or a significant amount of cash and tokens. Cash can be deposited to your bank account once you have earned $100. Tokens get deposited to your wallet daily.

Minds+ costs roughly $5 per month in tokens or cash.

Minds Pro includes the features of Minds+ with a few additions. The more significant addition is the creation of a subdomain page for your channel. This makes it easier to refer people to your Minds account. There is only the one template, which is populated with all your posts. The Pro page allows you to search your own posts or scroll through photos, videos, or blog posts. In addition, you can create categories for your posts that are selected by using tags on your individual posts. One feature that has not been instituted is setting up your own domain.

In terms of rewards, Minds Pro offers the opportunity to cash in on pageviews, referrals, and Minds+ content. Of course, the subscriptions, offers, and tips options mentioned previously are also included.

Minds Pro costs roughly $40 per month or $480 annually in tokens or cash.

Minds recently announced changes to their tokenomics, which includes a token burn. Minds has set up a liquidity pool on Uniswap to facilitate the purchase and trading of Minds tokens. To that end, they have also partnered with Transak to facilitate fiat purchases of the token. The daily rewards issuance has been increased to 10,000 tokens daily. This is great given a community of roughly 500,000 users. More importantly, they are also issuing rewards to users who hodl Minds tokens on-chain in their ETH wallet, and users who provide liquidity to Uniswap, which mostly consists of ETH/MINDS.

To some degree, the changes make Minds almost similar to Hive in that the larger your stake the greater your rewards. Except that Minds tokens are merely held on wallet or in Uniswap rather than staked. Thus, Minds tokens are a bit more liquid without the need to wait 13 weeks to power down.

With these changes, merely holding tokens generates enough tokens to power Boosting your content or subscribing to a few channels. That is based on how much. I accidentally wound up with almost 1000 Minds tokens because they weren't worth much when I bought them. Today, Minds is trading at $0.96 per token. With my accidental hoard of Minds tokens and activity, I can expect to get roughly 10 Minds daily. That's a mix of activity, hodling, and UniSwap liquidity rewards.

Those reward tokens can be cashed in for advertising both channel and content. Or, I could move the tokens on-chain and build up my war chest. Ideally, I would save up enough tokens to afford to advertise daily. This would be a closed system that takes advantage of the Minds+ and Minds Pro rewards that are paid out in cash.

It is also quite possible to take payment from outside clients for promotional posts, which can be paid for with Minds tokens. Of course, this would have to be tested for efficacy. I don't see any mention of the click through rate of Minds Boosts. But, it's worth testing. The only limitation is that you can only purchase 5000 impressions at a time. Thus, it would be better to run such a campaign with multiple posts, which can serve for A/B testing.

That's all for today. I thought I would share some thoughts on how Minds is improving on their value proposition for users. I don't see it as a competitor for Hive. Minds has a different audience and way of doing things that lends itself more to traditional online marketing. Hive doesn't require such shenanigans. On Hive, the account itself is the reward before even reaching out to potential customers. Imagine a company plopping down $10K on Hive for advertising. That $10K would steadily grow as the account interacts with Hive users. It's advertising that would pay for itself and pay its potential customers. It's a different hustle to what Minds offers.